Bridgestone tires have either a red or yellow dot, which can be used to mount tires for optimum initial balance and minimum ride disturbance.Where the dots go depends on which dots – and which wheels – you have.

We’ve often recommended the correct positioning of the red and yellow dots on Bridgestone tires with respect to certain “landmarks” on both steel and aluminum wheels.A reader asked us to go a bit further, and explain WHY. 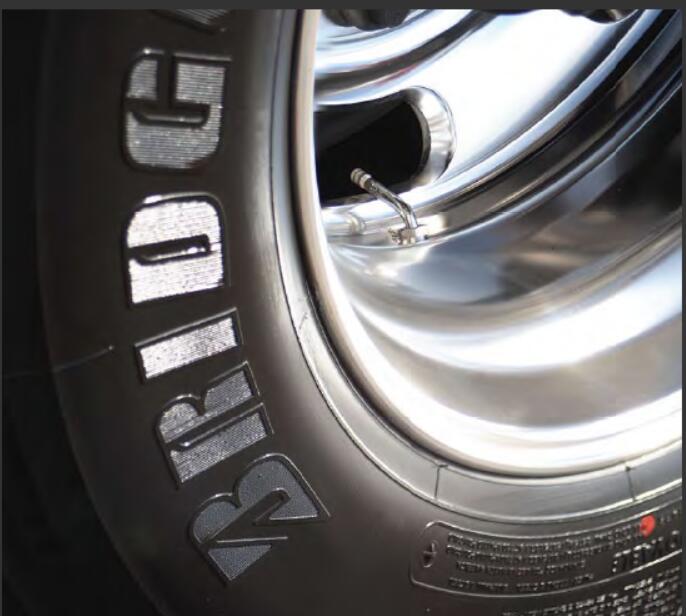 Can we review which dot goes where?

If the wheel is aluminum, or if it’s steel, but has no low point dimple, mount the tire with the red dot next to the valve stem.

And if the tire has only a yellow dot?

Regardless of the type of wheel, if there is no red dot, mount the tire with the yellow dot next to the valve stem.

Why do it that way?

We’ll start with the yellow dot, because it’s easier to explain. The yellow dot indicates the overall light static balance point of the tire. In other words, it’s as though the tire is a bit lighter in the area where the yellow dot is located.

How does that relate to the wheel?

Why is an aluminum wheel heavier at the valve stem location?

And, if you look at an aluminum wheel, you notice that where a hole has been cut into the wheel, an identical size and shape hole is cut at a location 180 degrees opposite it.

The result is that even with all their cutouts and holes,aluminum wheels are still very uniform in balance. Except for one place.

Where the valve stem is located. At that spot, the manufacturer has to bore a hole through the wheel for the stem, removing metal from the wheel. That hole is about 9.7 mm in diameter and the aluminum at that point is usually about 7.6 mm thick.If we do the math, knowing that aluminum weighs about 2.64 grams per cubic centimeter, we find that the aluminum removed to make the hole weighs about 0.52 ounces.

So wouldn’t that make the wheel lighter at that point?

If you didn’t replace the aluminum you drilled out.But you do. Into that hole, you mount a valve stem.And one of the most popular valve stems, including its securing nut and rubber grommet, weighs about 1.7 ounces.

The same is true on steel wheels, so match the yellow dot to the valve stem on those.

How to paint the auto wheels by yourself 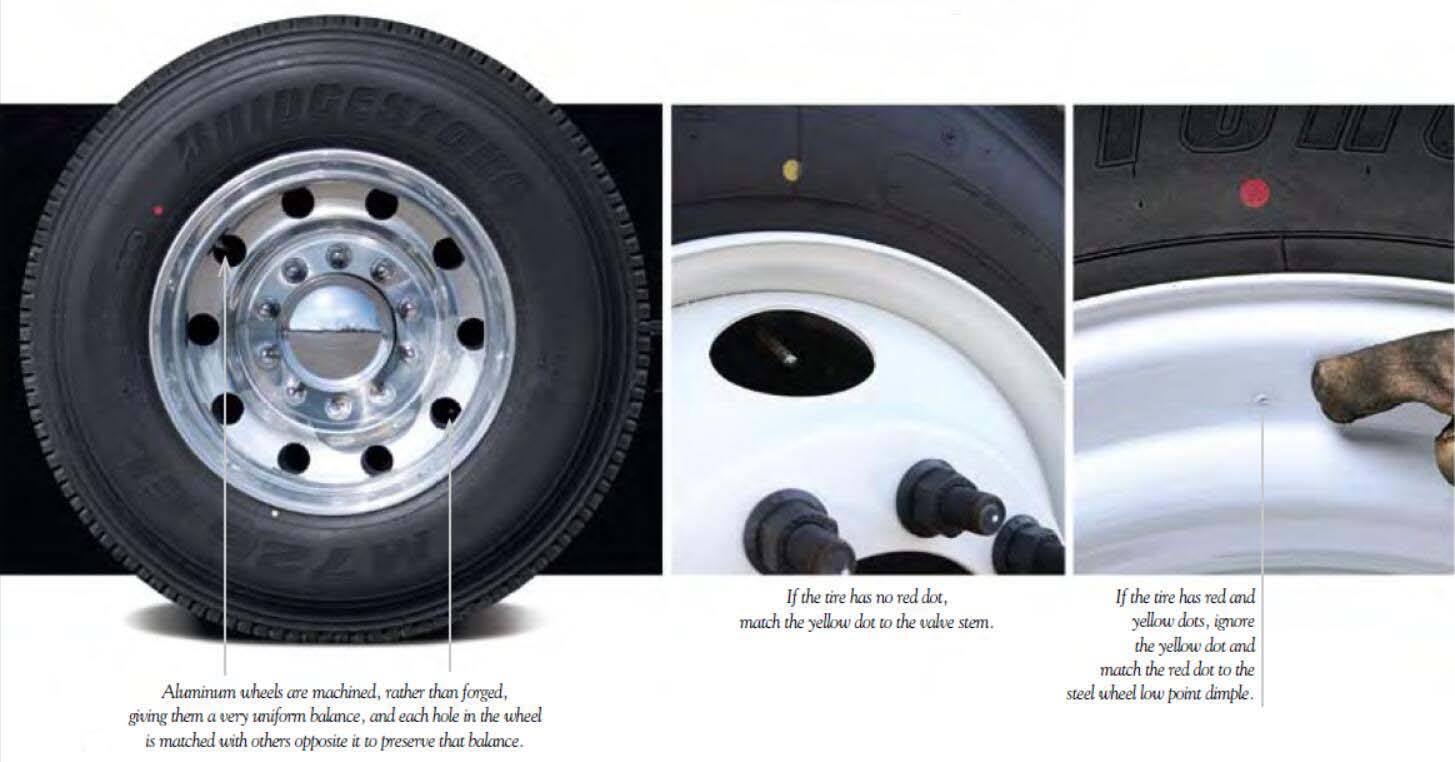 OK, that makes sense for the yellow dot, but what about the red dot?

The red dot is much more complicated than the yellow dot. It indicates the “radial force variation first harmonic maximum.” That’s a mouthful, of course, but it”s a way of indicating where the centrifugal force tending to pull the rotating tire away from the wheel is greatest.

Another way of looking at it is that in a sense, if the tire were out of round, the red dot would more or less correspond to the “high point” or place where radial runout forces are greatest.

Why not just measure the runout of the tire?

The radial force variation measurement is much more accurate in predicting tire behavior. In fact, the red dot often isn’t located exactly at the “high point.” Instead, it accurately marks where the runout-like force is greatest.

But, if you think of it as marking the tire’s “effective”high point, it becomes pretty obvious why you”d match the red dot with the steel wheel “low point” dimple. It’s as though the tire is a bit “thicker” (from wheel to tread) in the red dot area.

And, since the dimple marks the low point on the steel wheel, you might say the wheel is

a bit “thinner”(from axle to flange edge) where the dimple is.

So, it makes sense to match the red dot to the wheel dimple.

And on aluminum wheels?

At the red dot location, the tire is trying to pull away from the center of the axle a little bit, as a result of higher centrifugal force.

As in our last example, it’s as though the tire is a bit “thicker” near the red dot, which has the effect of pushing the wheel and axle upward as the red dot gets to 6 o’clock.

Meanwhile, the fact that the wheel is a bit heavier at the valve stem location generates a centrifugal force effect trying to pull the axle downward as the valve stem gets to 6 o’clock.

Those forces tend to counteract each other.

How to Install & Replace TPMS Sensor by yourself

And the final result?

Matching the dots is no substitute for balancing tire and wheel assemblies. What it does, however, is give you the best start, so you are more likely to use less total weight to bring an assembly into balance. 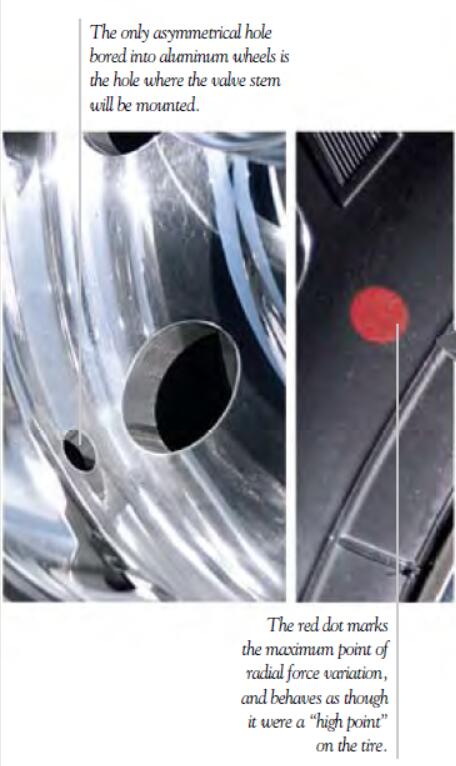 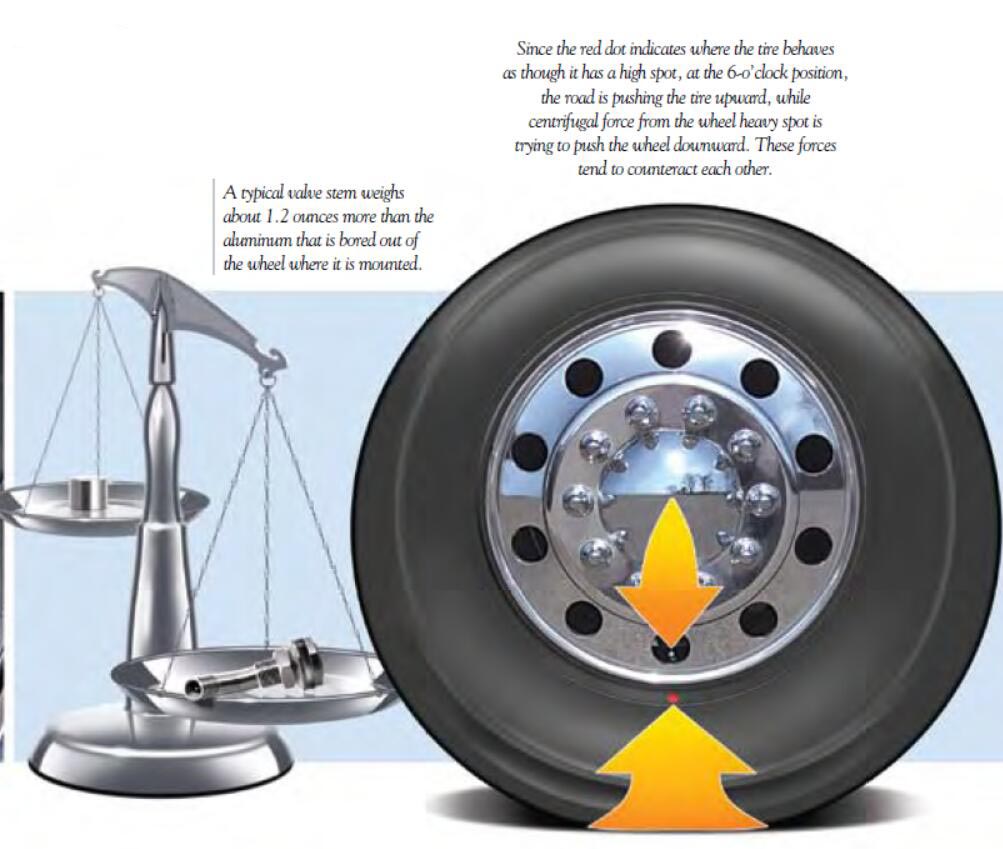