Today’s vehicles and especially today’s electrical systems with their control units and distributed functions place greater demands on tools and technicians. It is both time-consuming and complicated to carry out troubleshooting on vehicles of such complexity. SDP3 has therefore been designed to support the mechanic during troubleshooting and thus reduce downtime.

SDP3 also supports the troubleshooting of industrial and marine engines.An advantage of SDP3 is that there are more possibilities than before for the individual item, i.e. the vehicle or engine to which you are connected, to give a description of itself. SDP3 makes use of this and only displays information relevant to the vehicle/engine to which it is connected. 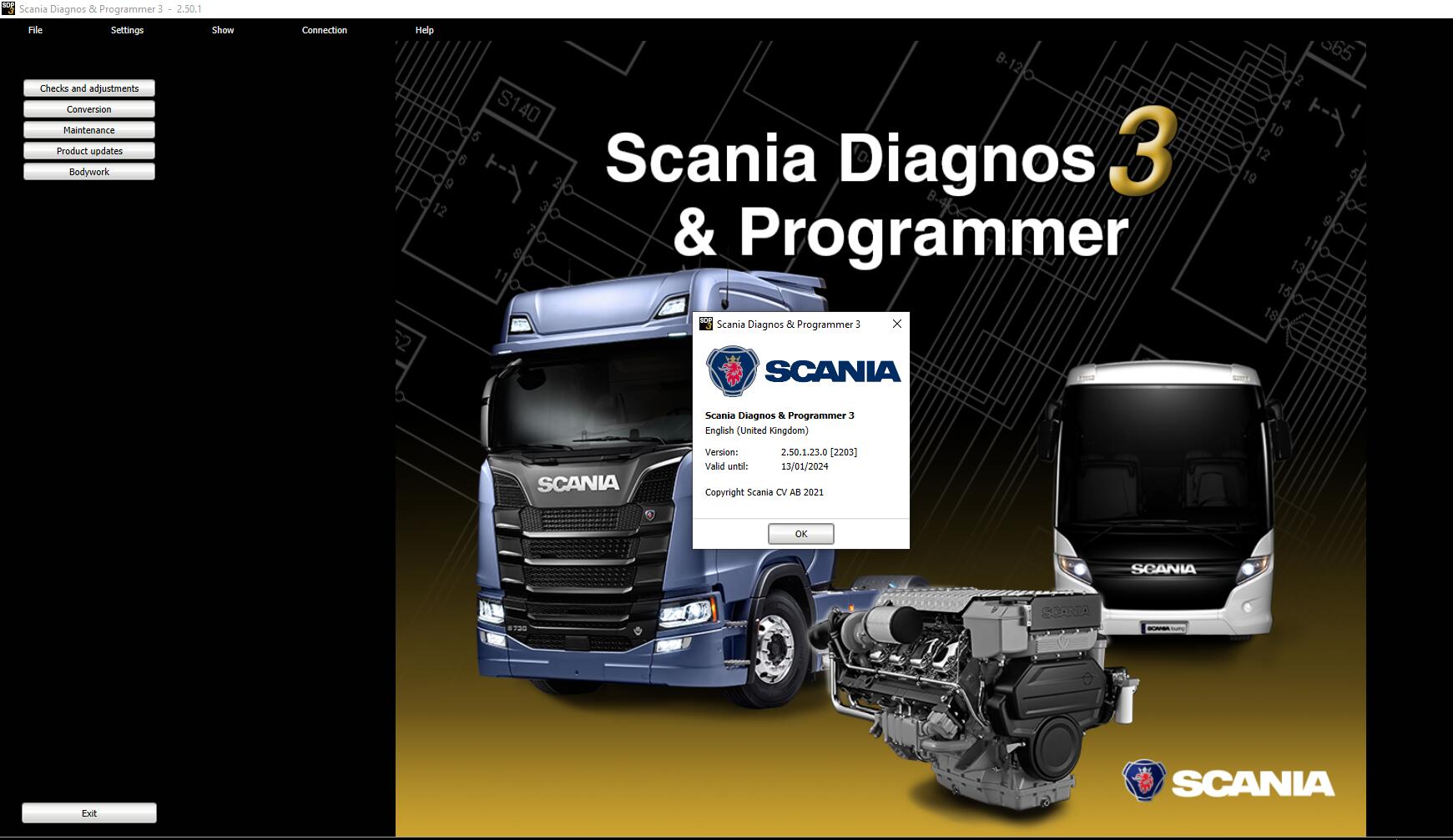 Need Netframework 4.5 installed on system. windows 7 or 8 will be better.

In order to install SDP3, administrator rights are required.

Note: The USB key and VCI must not be connected to the computer during the installation of SDP3, especially  if SDP3  is not installed for the first time.

Scania Diagnos & Programmer 3 Version2.48.2
New general features
No major new general features in the issue.
New system-specific features
Chassis management system
The wizard Checking fuel level measurement for sensor from bodybuilder
now also applies to L, P, G, R, S series trucks. The wizard is used to
adapt the fuel level sensor characteristics for vehicles delivered without
Scania’s own fuel tanks and fuel level sensor or that have undergone a
conversion to install tanks or a fuel level sensor that are not from Scania.
The wizard can be found under Functions > Check > Power, fuel, air and
fluid supply > Fuel level.
System-specific changes
No major new system-specific changes in the issue.
Corrections
Engine management system
The wizard Checking the EGR circuit to verify rectified faults has been
corrected for S7 and S8 Eu5 vehicles. Some individual vehicles did not
get past the warm-up stage.

New general features
No major new general features in the issue.
New system-specific features
Engine management system
A new parameter for the Over-acceleration protection bypass has been introduced. This parameter should be inactive during normal operation,but it can be activated. The parameter is for vehicles driven under extreme conditions.
A number of previously hidden fault code texts concerning the exhaust gas temperature sensor have been reintroduced.

New general features
No major new general features in the issue.
New system-specific features
Level adjustment
There is a new check wizard for Deactivating drive on rearmost driving axle. It is intended for use during roller brake testing, for trucks with double rear driving axles. It can be found under Level adjustment in the Check tab.
Alarm system
There is a new check wizard for Micro switch check. It can be found under Alarms in the Check tab and is intended for bodybuilders of the new generation of buses, i.e. C and K series.
Exhaust gas aftertreatment management system
There is a new check wizard for Analysis of saved vehicle information at high nitrogen oxide emissions. It can be found under Powertrain > Emission control > Exhaust gas aftertreatment in the Check tab. The wizard is available for trucks and buses with engine management system S8 and EMD1 with emission class Euro 6.

2.44.1
New general features No major new general features in the issue.
New system-specific features
Driver assistance system
User function 522 Lane keep assist has been added. It is possible to read the version number of the functions to compare with e.g. the certification document.

2.43.3
New general features No major new general features in the issue.
New system-specific features
Driver assistance system
There is a new wizard for driver assistance functions (DAS2) where the version number can be viewed in order to check the certification. It is located under Function view > Driver assistance and under DAS2. It is called Version number for active steering functions.
Chassis management system
There are new parameters for the Characteristics of the fuel level sensor from the bodybuilder. The chassis management system now also supports air suspension.
Electric machine
For electrically powered buses, there is a new wizard for changing the oil in the electric machine.

2.43.2
New general features No major new general features in the issue.
New system-specific features
Short-range radar
The wizard Installation of short-range radar system has been added and is available under Functions > Calibration > Driver support > Short-range radar. The wizard is used to configure the installation of short-range radar for buses.
Gas supply control system For fault code 4274 in GSC, the subheading Action has been updated. If the cause of the fault code is internal leakage and the vehicle has solenoid valve for low pressure V175 with part number 2 617 079 , the piston in the solenoid valve must be renewed. 2.43.1
New general features C, K series buses This issue contains additional support for the next generation of buses.
Electric vehicles
This issue contains additional support for electric vehicles.
New wizard on deleting recall campaigns
The Delete recall campaign message in the instrument cluster wizard has been added. This can be found in the function view under functions for connected vehicles.
New system-specific features
VIS – Extended troubleshooting support for the AVAS control unit, E531
Extended troubleshooting support is available for the AVAS control unit, E531, which manages the acoustic vehicle alert user function. Its purpose is to inform vulnerable road users of quiet vehicle operation by means of an audible signal