If your car is starting to run rough, getting horrible gas mileage or have an error code, there is a good chance it is time to replace the fuel injectors. So here I want to share you about how to replace fuel injector for Benz C350.

First,you need to remove the front and rear engine covers along with the air ducts.Please read the article I wrote before: How to Remove Benz C Class W204 Engine Cover

The fuel rail and injectors are located on both the left and right side of the intake manifold and partially hidden by the wiring loom and EGR hoses (red arrows).The fuel rail is a single piece and connected by a piece of pipe that runs along the rear of the ECU unti.

To remove the rail and injector begin by disconnecting the two wiring connections on the left side of the motor (red arrows) and slipping the harness of the fuel rail (yellow arrow).

Pull back on the wiring bracket on the right side only for the connection the ECU (red arrow).This separate the wiring connection.

Tilt the EU back out of the way with the left side wiring connection still attached (red arrow).Use a T30 Torx and remove the ECU mount on the right side of the intake manifold (yellow arrows).

Disconnect the wiring from the coils by using a small screwdriver and pushing the clip back and then gently squeezing the clip and sliding the connections off (red arrow).

Use an E10 Torx and remove the bolt holding the ground wire in place (red arrow). 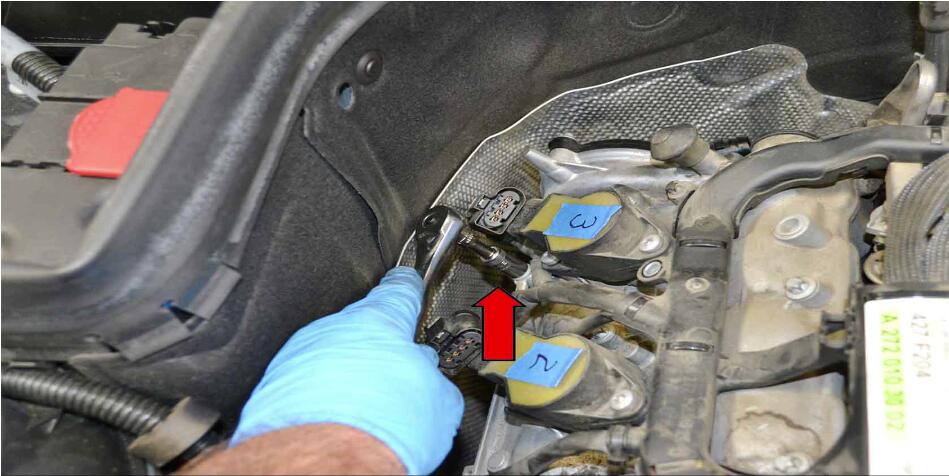 Continue to use the T30 Torx and remove the two screws holding the wiring harness bracket from the rear of the motor (red arrows).

Disconnect the wiring from the air pump (red arrow)

Remove all the electrical connections from the front of the right side cylinder head (red arrows) and move the wiring harness off to the side.

Use an E10 Torx and remove the wiring harness connectors from the left side bank (red arrows),including the one on the lift eye on the rear.

Next,remove the two T30 Tox screws (red arrows) holding the left side ECU bracket and release the EGR hose from underneath it (yellow arrow). 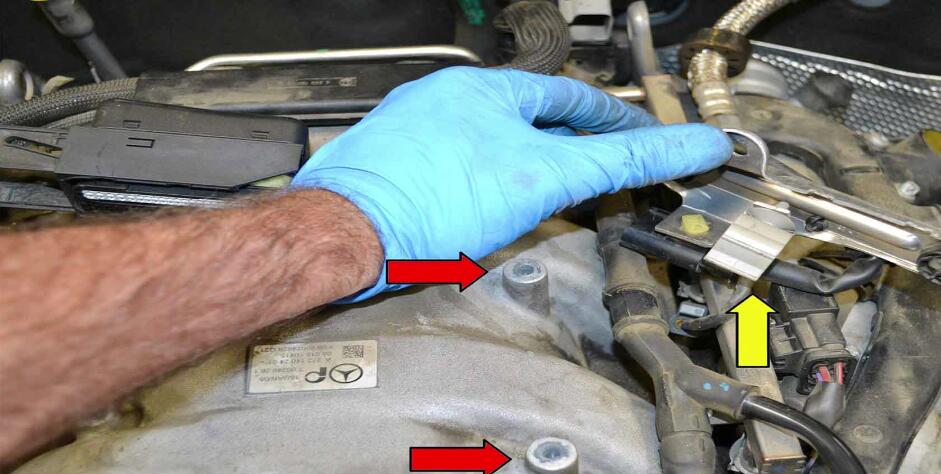 Pull the EGR hose from the top of the throttle body (red arrow) and move hose out of the way.

The connections for the ingjectors are small,can be brittle and in a tight spot.Use a small flathead screwdriver and pop up the gray clips (red arrow).Then gently squeeze the clips and pull the connections off each injector.

Even though the engine should have been siting overnight and you have removed the fuel pump relay to try and get the fuel out of the rail there will still be come.Unscrew the Schrader valve can and wrap a screwdriver in a rag and press in the end of the Schrader valve (red arrow).This will release the remaining pressure in the system.Gasoline will come out,so be prepared to catch and dispose of it according to the regulations in your area.

Use a 17mm wrench and separate the fuel line from the distribution rail (red arrow).Some fuel will come out,so be prepared to catch and dispose and dis pose of it according to the regulations in your area. 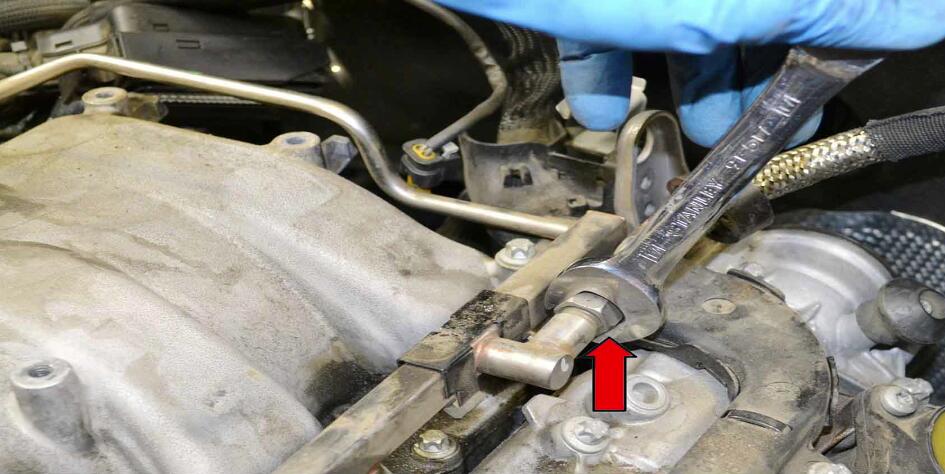 You can now pull the fuel distribution rail out from the manifold.The rail is just held in place by the six O-rings between the injectors and manifold,so you should just be able to wiggle and pull it straight up.

Once the injectors are removed there is an hole into the intake manifold and then the combustion chamber.Make sure you stick some rags or clean cloth into the opening to  prevent anything from failing in (red arrow).

Take the fuel rail and injectors to your workbench.Fuel will still be in the rail,so be prepared for some to spill out while you work on the injectors.

Each injector is held in the rail by a metal clip.Use a small flathead screwdriver and pry the clip back off the injector and rail (red arrow)

You can now wiggle and pull the injector from the rail.Do not pull so hard that you damage or bend the rail.

New injectors will come with new O-rings.If you are reinstalling any of the old injectors,always replace both the O-rings for the fuel rail (red arrow) and manifold (yellow arrow).Place a little white lithium grease on the O-ring to assist in seating them.Installation is reserve of the removal.