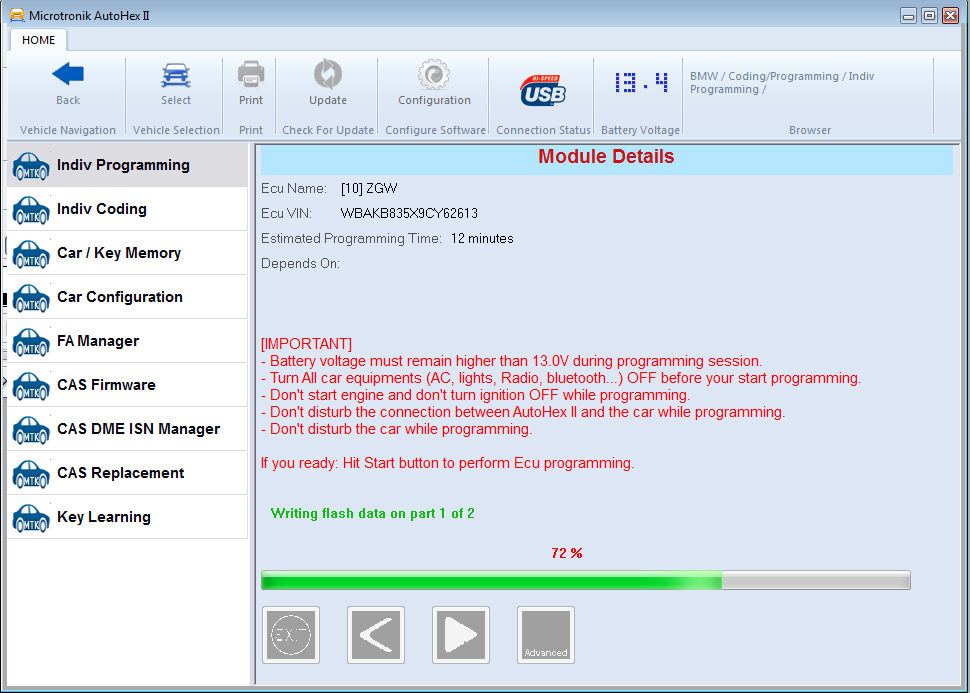 1Easy to use,it is user friendly

3Comply with all required and some optional standards

BMW Ecu Programming is an easy to use with Autohex II, it performs Flashing the Ecu with latest version,code it,Change VIN, and other functions in one step

BMW ISN Editor Software in Autohex II lets you read ISN from DME, match it with CAS. This is essential for DME or CAS replacement, Autohex reads ISN from wide range of DME/DDE

Autohex II Ecu coding for BMW is a straight forward function, you can choose between Auto and Manual coding to encode the Ecu you wish

Autohex II BMW Software can do two methods of Ecu coding, auto coding which will be calculated from FA, and a manual coding for Ecu modification

Autohex II BMW Software can write FA into CAS from other Ecus,backup FA in other Ecus, also you can modify the vehicle order safely

For making keys, reading ISN and changing VIN for CAS which comes with specified part numbers, will not work just through direct reading, CAS Firmware function should be done to make it work

BMW Key programming by Autohex II is done by OBD, No dump is required. including CAS with latest update and all keys lost. it supports all BMW Models as well Mini cooper.

You must be connected to the internet before start using BMW Ecu programming procedure, as Autohex II software will need to download the required data flash from Microtronik server database.

It is important to arrange a good battery booster connected to the car, voltage must remain above 13V during all the programming session, and the laptop must be connected to a charger if the Ecu programming period will take a long time. 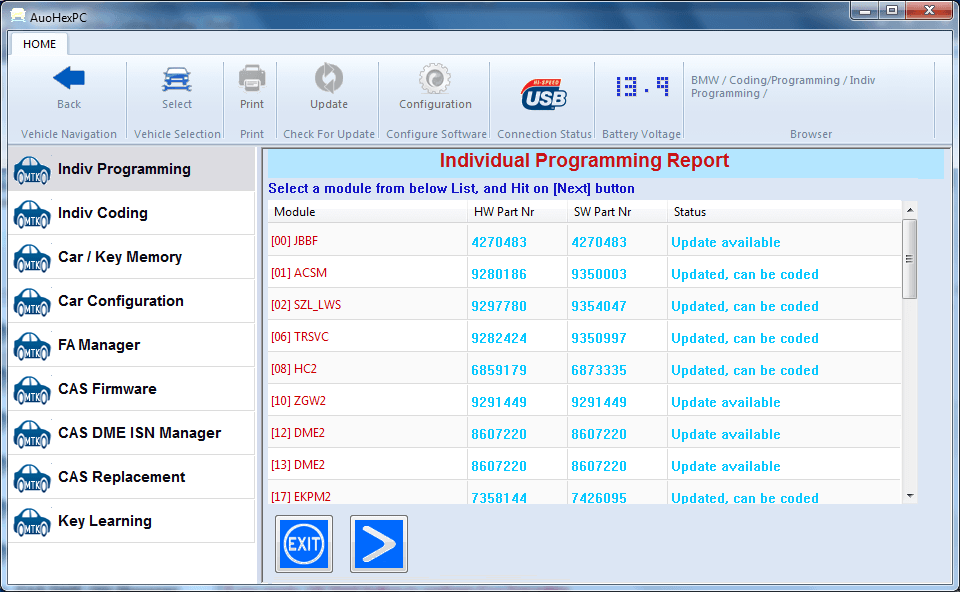 After you select Individual Programming from the Autohex II BMW menu, AutoHex II software will start calculating the Ecus flash updates. This may take:

Few seconds if the car is E series

Few minutes if the car is F series and it is first time to be tested.

Few seconds if the car is F series and being tested before.

The results of the Ecus updates will appear eventually on a list describing each Ecu:

The Status of this Ecu

The required Action of this Ecu

The status of the Ecu is very important indication, you may find one of the following possibilities:

Update Available: This Ecu is compatible with the stored vehicle order in the car, there is an update for this Ecu.

Updated: This Ecu is compatible with the stored vehicle order, no update is required as it has the latest version, you can only codes it.

Replace with XXXXXXX: This Ecu is NOT COMPATIBLE, and must be replaced (or swapped by expert mode)

Mount XXXXXXX: The Ecu could not be found, it may not responding or it is not mounted (usually you will see BMW Hardware and BMW Software zeros)

Autohex II allows you to jump to next step only if Ecu is compatible, OR marked Replace With if you are in Expert Mode (BMW E series only).

Once you click on Start, Autohex II will check the conditions like: Car battery voltage, connection method (USB or Wi-Fi), laptop battery status, then it will download required flashing data from server. If all conditions are pass, then will start preparing vehcile for programming, and starts the programming session afterward.

BMW ISN Reading and writing can be used from Autohex II software: CAS DME ISN Manager, This advanced function can do the following:

Read ISN for EGS 6HP in E Series, and automatically matching with CAS.

Read and Write BMW ISN for most of BOSCH DMEs in F series.

AutoHex II can perform BMW ECU coding individually by selectiong the desired Ecu to encode, this function is used in same manner in both BMW E and F Series.

After selecting  Individual Coding from BMW main menu, AutoHex II will show you a report of each ECU in this vehicle, the status of the ECU is one of the following:

Ecu Has No Coding.

If the status is Not Compatible then you must try to go to  individual Programming function, from there Autohex II will try to program the Ecu with the proper flash program and encode it from there.

If the status of the Ecu is Not Responding, You can check if Ecu is mounted, and connections are correct.

Some Ecus does not require coding like Central Gateway in F Series ( ZGW ), you will get a status like Ecu Has No Coding.

One option inside BMW Ecu coding in Autohex II BMW software is the manual coding.

Manual coding purpose is to let you able to modify some parameters of the Ecu, for instance: a default parameter value of the occupancy sensor in an Airbag Ecu is active, you can make it inactive.

To start Ecu manual coding function, you can select the desired Ecu from the coding list, and then click on Advanced button.

The above picture shows that Autohex II BMW Software lets you chose between Auto coding and manual coding, in Auto coding, Autohex II will calculate the Ecu parameters relying of the vehicle order which is stored in the CAS, this will guarantee a correct coding that will let this ecu works perfectly in the vehicle with other Ecus.

Manual coding will let you chose among these parameters and do the modification, from the above picture; you note some nodes are red, some are blue.

The red means this is what the parameter supposed to be, the blue means it is not the standard.

You can use the reset button to return all parameters to the standard values.

One of advanced functions in Autohex II BMW is the FA Manager (Vehicle Order Editor),

BMW E Series stores the vehicle order in CAS, a backup of this information are stored in Light Module (LM) or FRM.

While BMW F series stores the vehicle order in Central Gateway (ZGW) and there is a backup copy in the CAS.

Autohex II can backup and restore these data from those Ecus, as well as it is able to save this important information in your local disk as a backup.

Basic tasks of this danced feature are:

Read FA from CAS and write them into the backup Ecu (LM, FRM) automatically (Backup function)

Read FA from the backup Ecu (LM,FRM) and write it into CAS (restore function)

Save the FA stored in CAS in your laptop, the file will be named by the VIN of the CAS

Write the saved FA in a file to the CAS

The above tasks are more than enough to do all the required jobs in BMW, like if you replace the CAS with a used one, you must use this function to write the correct FA in the new CAS.

Same if you have replaced the FRM, it is recommended to write a copy of the FA in this FRM for in case the CAS got damaged in the future, so you will have a correct backup FA.

Before we jump to the advanced function in FA manager, it is strongly recommended to always save the FA contents before you do any modification in the FA.

You can use this feature for BMW retrofit such adding or removing features in BMW car.

We added a unique feature in this function to add more safety while using this feature, Autohex II will always notify you about the status of the FA is it is valid or not valid.

Autohex II will store the modified Vehicle Order in CAS only, you must do the backup from the basic funtions window.

After a sucsseful modification of the Vehicle Order, you must encode the corresponding Ecus that will get affected by this modification.

The CAS firmware function in the AUTOHEX II is one of the advanced function to easily downgrade or restore your CAS versions. All complex steps are just made simple and user friendly in just one click.

The main functions are:

Restore back to original version

For making keys, reading ISN and changing VIN for CAS which comes with specified part numbers given below will not work just through direct reading. CAS Firmware function should be done to make it work. CAS firmware can do it in just one click.

Go to CAS firmware from AUTOHEX and you can check the status of CAS, whether it is downgraded before or not on the details provided about CAS on the page.
Before starting to read all the messages and warnings carefully and make sure you are keeping up the required conditions given as IMPORTANT.

After carrying out all your operations (read ISN, make a key, change VIN,…), for going back to original version go to CAS firmware and do the following steps

In CAS firmware window you can see that the CAS is already downgraded and it is possible to restore it back to its original version.

Autohex II is the best solution for BMW locksmiths who are looking for a single tool that solve all cases in BMW key programming, a tool with a robust functions that will do the job precisely, covering all the cases and able to do job no matter the situation is.
With the special functions for BMW key programming and the help of Microtronik HTag Pro key programmer, locksmiths can read, write, block, unblock,save and delete any key in the CAS.
Autohex II is an advanced tool for Encrypted CAS (CAS3+), locksmiths can add new key with or without working keys available for all versions of CAS3+.
After selecting Key learning from the left list, you will get a list of available functions as in below picture.